Important Update concerning the Exceptional flooding on the Infrabel network

The current detour for the Rail Freight Corridor NORTH SEA – MEDITERRANEAN will therefore remain in place until 27th of September and we will cooperate with your staff to find solutions for your trains wherever possible.

The reopening of L. 161 between Ottignies and Gembloux is scheduled on 30th of August (under the condition of a final confirmation on 23th of August).

Various railway lines in Wallonia that were damaged by the floods will be put back into operation on Monday. This was announced on Thursday by the railway company SNCB and the network manager Infrabel. The connection between Gembloux and Ottignies, which was again damaged by last weekend's storm, will only be resumed on 30 August.
Trains will again be running on Monday on the Auvelais-Gembloux, Liège-Bomal and Liège-Trois-Ponts lines. Also between the stations of Rochefort-Jemelle and Poix-Saint-Hubert, rail traffic will be possible again on Monday, a week earlier than expected.
The connection between Ottignies and Saint-Joris-Weert will be partially opened, with train traffic running on a single track from Wavre onwards.
The Anseremme-Dinant link is also expected to be reopened from 9 August. The reopening of the railway line between Dinant and Namur will take another week, until 16 August. The bad weather that hit Dinant last weekend caused additional damage.
Trains between Chênée and Pepinster and between Pepinster and Spa will probably only resume on 30 August. The same target date now applies to the Gembloux-Ottignies line, where repairs have been delayed. 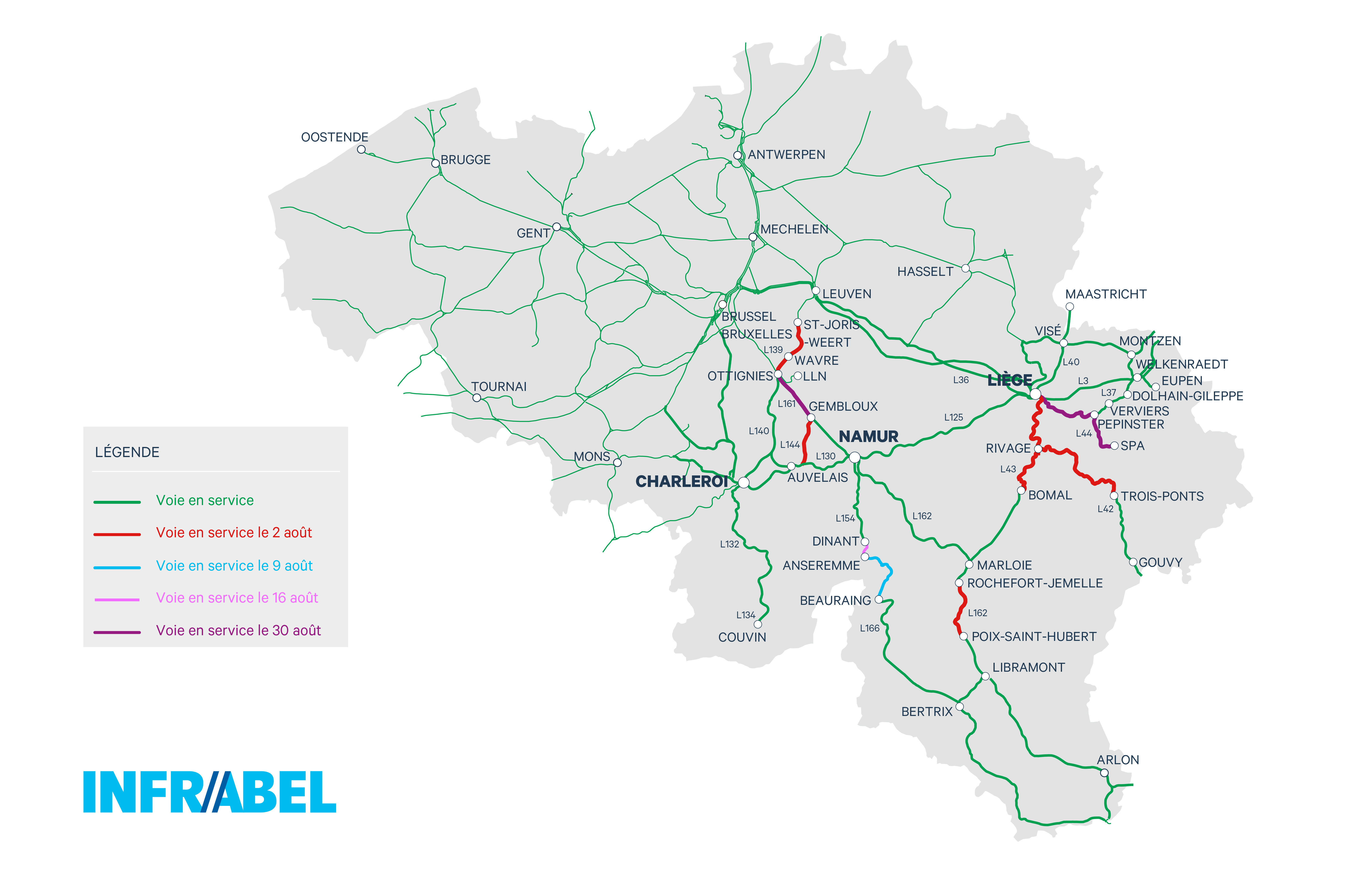 The railway section between Wavre and Sint-Joris-Weert in Flemish Brabant (L139) should be back in service on Monday 9 August, a week later than planned, Infrabel, the railway network manager, announced on Monday.
The heavy rain that fell on Walloon Brabant last weekend weakened some embankments. There are also major repair works to be carried out following the collapse of mounds of earth on the tracks.
In Basse-Wavre, catenary structures were weakened by the flooding.
In addition, the progress of repairs to the signalling system depends on the delivery of certain components which are not always immediately available. 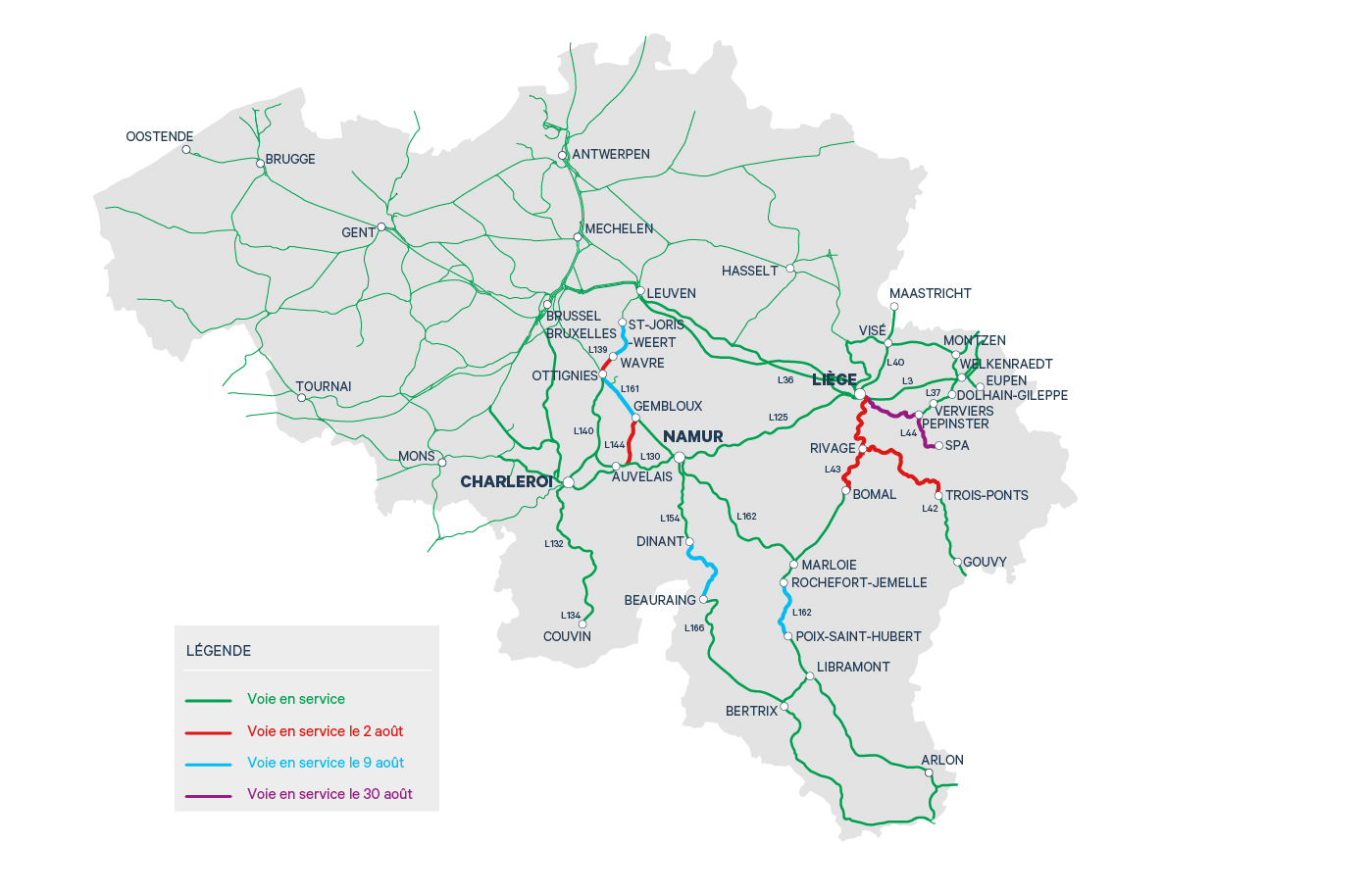 Further updated are expected the coming days and will be communicated as soon as they are available.

First, our thoughts are with all the victims of this flood.

The plan for the resumption of traffic, line by line

The plan for the resumption of traffic provides for a gradual return to service on the lines between 19 July and 30 August. Trains will run at limited speed in some places. Liège-Guillemins station, which had to be closed on Thursday 15 July, was able to open again in the afternoon of Friday 16 July.

In the province of Liège:

In the provinces of Namur, Luxembourg and Walloon Brabant :

The map below gives an overview of the reactivations, according to colour codes:

Focus on the freight Traffic:

Rail freight traffic is still disrupted in several places. The good news is that the Montzen route (L24) is back in operation. This is an important freight route between the port of Antwerp and Germany.

The important freight corridor between the North Sea and the Mediterranean continues to be severely affected by the storm. Trains are still not able to run, either on the main route or on the alternative diversionary routes. This concerns the following railway lines (see map above):

The outlook for the Walloon axis between Charleroi and Liège is encouraging. If all goes according to plan, lines 125 and 130 should be able to resume operations next Monday, 19 July.

The railway line between Liège and the Dutch border at Maastricht is closed at the border. The water damage there is also considerable, and the prospects for a return to normality are not expected until 2 August.

Infrabel is in close consultation with its customers and foreign infrastructure managers to find and propose solutions.

In Flanders, freight trains can run between the ports of Antwerp, Zeebrugge and Ghent. Freight traffic is also possible between the ports and the Netherlands and France. The local centre of Genk-Goederen is also accessible from Flanders and Germany.

(Initial communication on the 15th of July 18h)

Exceptional flooding on the Infrabel network

Rail traffic is still at a standstill on a dozen lines in Wallonia. No trains are running on the Walloon backbone between Charleroi, Namur, Liège and the border with Germany. Traffic is also at a standstill between Namur and the Luxembourg border. Freight and passenger trains are affected. Infrabel is mobilising reinforcements.

The bad weather has caused considerable damage to the railway infrastructure. At this stage, Infrabel is not yet able to assess the damage and put a precise figure on it. The inventory will only be carried out once the bad weather has stopped. In-depth inspections of the railway infrastructure will be carried out by our agents, who will check the stability of the tracks, bridges, tunnels and aqueducts. For example, bridges near rivers will receive special attention. The piers of bridges, for example, are being checked to ensure that the ground has not given way under the structures.